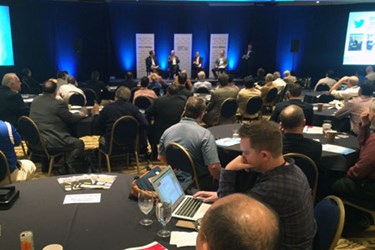 A crowd of nearly 150 channel executives participated in the first-ever ISV IQ Live! Conference Feb. 24 in Santa Ana, CA – and they had quite a bit to say on the topics of raising capital, partnering, and marketing. I wanted to share with you some the best quotes, comments, and insights from two of the event’s four panel discussions.

Tom Bronson of ISV Granbury Solutions on the risk of raising capital through bootstrapping: With boot strapping, you borrow money from your parents and your siblings and your friends and your neighbors. Boy, they could be putting potentially a much higher percentage of their net worth at risk and really need that return better. You should always treat capital as if it’s precious and golden, because it is. … The friends and family route – you’ve really got to protect that, and they need a return on that investment, because they may be dipping into their retirement funds.

Walker Thompson of Vantiv Integrated Payments on mistakes ISVs make when launching a VAR program: A lot of ISVs come in schizophrenic on what’s the right decision to make. I think if you do adopt a channel program, you’ve got to jump in feet first and whole body in. Our own company is faced with this dilemma … am I going to sell direct or am I going to sell through a channel? Many times that conflict can come into play, and we’ve seen the market disrupt a little bit, where ISVs are trying to figure that out and they are crossing streams at this point.

Todd Sexton of ISV Identillect Technologies on when ISVs should begin raising capital: What you have to really understand is, when you decide you need to raise capital, you really need to have a game plan, have a runway, and don’t push yourself up against a place that you need the capital tomorrow. If you do, you will take on a lot of onerous terms by your investors, and that makes things very challenging for you moving forward.

Mark Fraker of distributor BlueStar on ISV best practices when launching a VAR channel: From an ISV standpoint, when you go out and you decide that you’re going to bring in resellers, bring one person in and get to learn from that experience. Remember, they’re going to be an extension of you. Your reputation is now on the line with someone else, other than the people that you hired and brought into your company. They are, in essence, your face out in the market. If you’re going to do that and you train them, make sure that you test them, so that they comprehend exactly what you’re teaching them, because teaching and comprehension are two entirely different animals.

John Bodrozic of ISV HomeZada on finding partners to help you raise your initial business capital: Start with your own personal networks. With (ISV) Meridian (Systems), we had a corporate lawyer and an accounting firm, and these people were already dealing with startups and new venture investors. Our attorneys were giving us introductions. At that point in time, we were going to industry trade shows and there were a lot of venture capital firms that are big enough where they actually have junior-level staff, and they will actually attend some of these trade shows. There are these people that show up at your booth and they don’t really tell you who they are, and they’re actually scouting potential companies.

Gregg Brunnick of Epson on successful ISV/VAR partnerships: It’s very important for ISVs to do a lot of the planning and heavy lifting before you really start to engage with a number of VARs. ISVs who have a clear direction, who have decided to focus upon certain verticals and certain regions … can really help define the type of VARs they’re looking to partner with. It can really help narrow the selection of those VARs down.

Steve McKean of ISV TableSafe answering an audience member question about terms related to raising capital: I had to go through a long process over the last year of unwinding some of that. That’s painful when you’ve got to go back to investors and explain to them that what you created in your terms sheet that was accepted by the management at the time has now created a barrier that won’t allow other investors in. You can have these unbelievable terms and a zero return, or we can unwind these terms so that we can continue to raise money and get to market. That’s a really big issue, and I think it goes back to is do you have protectionist investors or do you have strategic investors?

Marc Solomon of WorldPay on ISVs finding the right match in a VAR partner: By just partnering with anybody who wants to do business with you, you spend a lot of time, and it’s a lot of wasted time. Look first make sure that the VAR that you’re looking at matches up in values, matches up with your business plan, what you want to accomplish, and then will actually bring something of value to you.

ISV IQ Live!, powered by Business Solutions, was held Feb. 24, 2016, at the DoubleTree Orange County Airport in Santa Ana, CA. An east coast version of ISV IQ Live! is scheduled for Oct. 6 at the City Avenue Hilton in Philadelphia. For more information or to register, go to www.ISVIQLive.com.