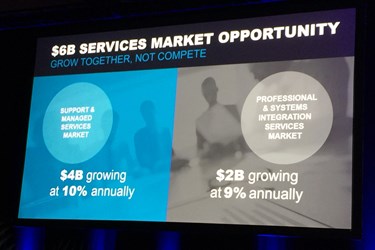 After three days this week of general sessions, one-on-one meetings, and solution presentations with Zebra executives and channel partners, there were a few highlights I wanted to share. Following are three themes that made the biggest impression on me and others I talked to at the event:

If there’s one thing Zebra made very clear at the partner summit it’s that it’s taking the IoT/EAI trend very seriously, evidenced by its acquisition of Motorola Solutions’ Enterprise business seven months ago, the way it’s kept its partners involved in the process of merging the two companies into one, and the speed with which it’s rolling out new solutions and services.

The big question that remains after this event is what percentage of Zebra’s 3,000+ channel partners are ready to cross the chasm from AIDC to EAI and do the same?

Zebra Technologies 2015 Global Partner Summit is being held May 3-5 at the ARIA Resort in Las Vegas. For more information on Zebra, go to www.Zebra.com.