Scaling Your Culture When Your Headcount Grows 200% 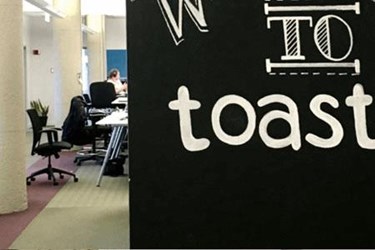 Cloud-based restaurant software company Toast Inc. was founded in 2012 and has already grown to more than 500 employees. This kind of growth requires much more than finding a bigger office. Toast co-founder and CEO Steve Fredette explains how this growth has required a conscious effort to continually adapt the company’s culture. He’s studied how companies like Google, Facebook, and Amazon have adapted their culture and has networked with other fast-growing companies nearby in Boston. Fredette also relies on examples his executive team has observed at their past companies. This doesn’t mean Toast has looked for a step-by-step playbook for how to scale its culture. He says, “We’ve certainly tried to make our culture our own. Every company’s culture has to be a little bit unique.”

Fredette points to all-hands meetings as an example of a cultural shift that is necessary with growth. These can be important forums for communication at any company. But those meetings become less and less meaningful as you scale. For example, Fredette explains, “It’s very different when you have 50 people in a meeting versus 500. Even if you’re just summarizing what you did that quarter or that month, when it’s 50 people, you did 1/50th of the work that’s being talked about. When it’s 500 people, you did 1/500th of that work, ten times less work. It becomes much less relevant to everybody in the room, and so you start doing smaller meetings and trying to figure out how to share your message at scale.”

Toast also faces the added culture obstacle that upwards of 40 percent of its 500 employees are remote. Once per year Toast hosts an all-company kickoff event, which brings every remote employee to its Boston headquarters. Past all-company events have included a boat cruise and an event at Fenway Park. “Those are great events, it’s a great chance for teams that are often just meeting on the phone to meet in person,” says Fredette. “But often what you find is the support team hangs out with the support team and the engineering team hangs out with the engineering team. Getting people across departments to work together is really important to me.”

To solve this, Toast hosts a field day and randomly assigns teams. Employees face off in games like volleyball and tug of war. The games and rules aren’t the main focus. “The important thing is it forces people across departments to meet and work together on something fun,” he says. Organizing a happy hour doesn’t necessarily mean your customer support team and your engineering team and your product management team will interact with each other. “I think social events are important for getting people to talk across the company, but not everybody is going to get outside of their department.”

Toast’s culture isn’t solely shaped by the executive team. In fact, Fredette doesn’t even sit on the company’s culture committee (“I would love to be on it, but maybe someday they’ll invite me to it,” he jokes). This is an employee-led grassroots effort. The committee puts on the field day, and has started quarterly company awards that give winners a golden toaster. There’s also an internal magazine, called “The Slice,” that interviews employees, publishes employee’s poems, and calls out birthdays.

Most of Toast’s initiatives to scale its culture don’t require massive budgets or time away from its core mission of developing and selling software. Fredette says, “What I would hope to maintain as we scale is that people continue to feel empowered to make a difference, make an impact, have autonomy, and have mastery. We think about, ‘How do we build teams with diverse skills and experiences, and diverse cultural perspectives?’ It’s nothing that other companies aren’t already thinking about, but some of scaling your culture is just a willingness to put in time and effort.”