By Steve Sehy and Chris Livingston

The states have been rapidly changing the sales tax environment for internet businesses, including Software-as-a-Service (SaaS). This includes changing the definitions and taxability of SaaS as well as the requirements for determining in which states a company needs to collect sales tax. Since none of this contributes to company revenue or income, the best-case scenario is breakeven, and the worst-case scenario includes paying sales tax to a state (10 percent or more of revenue) when you didn’t collect it, as well as penalties. While larger companies may have a team working on this, small to midsize SaaS companies are struggling to deal with this issue.

WARNING: If you sell SaaS to customers in multiple states, it is very likely that you now need to be charging sales tax.

We have assembled a table indicating the current status of taxability in each state (see pages 14-15). Note: The definition of SaaS is different from state to state. You will have to research to confirm that your business falls within the definition that we used. Some states still identify SaaS as Application Service Providers (ASPs). In a SaaS/ASP model of delivery, software applications are delivered as services, rather than products, as in traditional licensing models. Application Service Providers host and maintain software for the end user, who then accesses software over the internet.

Nexus is the term indicating whether you need to collect and remit sales tax to a state. It means that you have sufficient contact with a state such that you fall within its tax laws. The general rule is that if you have an employee or a property in a state, you have nexus with that state.

Note: if you have a remote sales force, one employee in a state is enough to trigger nexus.

While sales tax is currently governed at the state level, several federal bills have been introduced in Congress over the past few years that could overhaul the U.S. sales tax system.

To help you follow sales tax changes in the future, here are some useful links:

There are now automated tools to assist you in calculating the sales tax by customer location. In general, these tools allow you to assign a Tax Code for each of your products, and this code is used to pull up the appropriate rate in states that you have activated. After the tax is calculated, the data is used to create and file the state sales tax reports. Some of these tools tie into your current billing system (e.g., QuickBooks). Others provide an API that can be used to integrate into your own checkout or billing systems.

NEXT STEPS TO TAKE

We have worked to simplify the information in this article to make it readable. There is room for interpretation and rapid change is happening in this area.

QUESTIONS TO DISCUSS WITH A SALT SPECIALIST:

You will want to have a 12-month revenue report by state and payroll register by state to facilitate this discussion.

As the states continue to look for revenue, these rules will continue to change. Be sure to find a way to keep up to date. 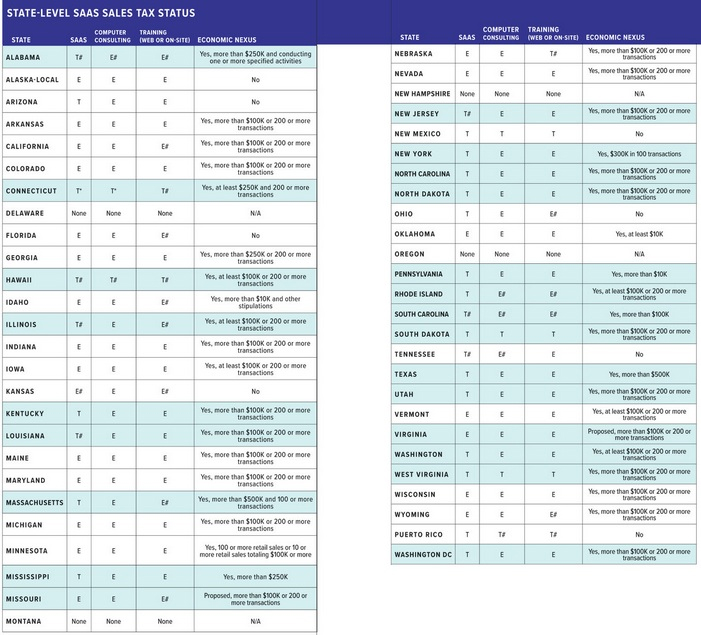 T = Taxable at the standard rate

T* = Taxable at a nonstandard rate

None = No sales tax in the state

T#, E# = Generally taxable or exempt, but final tax status may vary based on specific definitions or conditions. This could be due to regulations regarding where the host server is located in relation to the customer or whether the customer takes control of the server.

Defined as providing access to an Application Service Provider server of canned software delivered electronically over the web.

Defined as fees for setting up a new computer system.

Defined as separately stated charges for training sessions on the use of the software.

NO, PROPOSED, OR YES with the annual thresholds.

STEVE SEHY provides ongoing CFO services to multiple SaaS companies that are planning to raise capital. Prior to this position, he did software development/ product management and was a CPA auditor for RSM. You can find him on LinkedIn or at Steve@CaaSforSaaS.com.

CHRIS LIVINGSTON works with companies of all sizes, automating end-to-end sales tax processes from calculation and exemption certificates to filing. You can find him on LinkedIn or @CLivingston96.