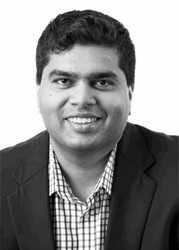 Forrester predicts the overall public cloud market will reach $236 billion by 2020. Amazon Web Services already owns about 30 percent of the market, and Microsoft Azure owns about 15 percent. Even though those are the two elephants in the room, that means there are still billions to be made around cloud infrastructure and services. And that’s why HyperGrid is excited about its on-premise cloud solution. The Enterprise Cloud-as-a-Service company was founded in 2016 through a combination of tech companies. Chief Product Officer Manoj Nair’s advice about helping lead a tech startup includes lessons for other software companies considering an acquisition, and for tech trailblazers trying to create a new market.

HyperGrid was founded from acquisitions, a strategy becoming more and more common in the software and tech world. When the company acquired XOcur, a business intelligence SaaS platform for cloud decision making, in June 2016, it needed to merge two independent engineering teams very quickly. Every two weeks HyperGrid releases a new customer facing tool, and even if it’s not immediately deployed to customers the internal teams will use it. Then every six weeks those new features are packaged and delivered to customers.

The merged team now uses a single platform and all of the same development tools. Since it’s a distributed team, engineers use Slack to stay closely connected. Debates over what tools the newly formed team should use only lasted about a week. Communication is key, and moving slowly in this space simply isn’t an option. The stakes are high too – this isn’t like asking new employees to adjust to a new timekeeping software. The tools your engineers use, and their abilities to effectively use those tools, can make or break a newly formed company. “Good engineers are highly opinionated about the tools they use,” says Manoj. “We asked them to follow an analytical approach and understand what our requirements are. Sometimes though, it takes a benevolent dictator to say, ‘OK, pick one.’  At some point you have to make the call and run with it. There are so many real, tough challenges to solve that our engineers don’t have the mental bandwidth to spend it on tooling.”

Nair says the company debated several different phrases to coin when deciding how to classify itself (and it landed on “Enterprise Cloud-as-a-Service”). Naming a new market category is the easy part – it’s explaining the value to customers that presents the real challenge. The first step is to define your customer base as clearly as possible. For HyperGrid, that means targeting only large enterprises, specifically global 5,000 companies. The next step is building a marketing team, and instructing this team to both listen to and influence key analysts and customers.

HyperGrid relied on the pain points of early adopters to refine its product. It was also selective about who these initial customers should be. Taking on any customer willing to try your product without considering that customer’s true fit often puts young companies at risk for a never ending cycle of scattered development projects. Ideal early customers are those who truly need your product and will come on board with the understanding that they are going to help you iterate. One of these customers, for example, came to Nair wanting its IT infrastructure to look like Google’s. The client knew they could hire former Google engineers and spend three years building that infrastructure, but it would be easier, cheaper, and less time consuming to partner with HyperGrid – even if that meant having to help HyperGrid develop its solution set over time.

“There is no magic bullet,” Nair says. “It takes networking, marketing, participating in shows, talking to analysts, and talking to partners. If you don’t like roller coaster rides, you won’t like working for a startup.”