Cost, Culture, And Your Next Office Move 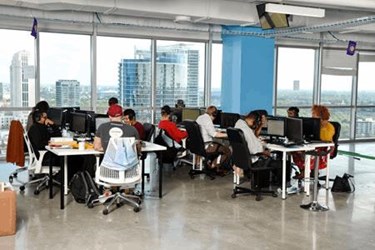 Why a software company that has grown 1,700% in 18 months didn’t want to set up shop in a traditional U.S. tech hub

Point of sale software company Epos Now isn’t headquartered in a traditional tech hub. Its global headquarters is in Norwich, about a two-hour drive northeast of London. Norwich is only the 38th largest suburban area in the UK with its total population of about 213,000. As far as British tech companies are concerned, Epos is a big fish in a relatively small pond, and that has helped build a sense of community at the company. VP of sales and operations David Duncan thinks it has helped with retention and loyalty too, since it’s not as easy for top talent to jump to nearby competitors (Epos has a 4.4/5.0 Glassdoor rating as of September 1, 2017 – that helps too). When Epos decided to expand to the U.S. in 2016, the company wanted to maintain that same kind of identity. It found what it was looking for in Orlando.

When Duncan and Epos CEO and founder Jacyn Heavens took a scouting trip to the U.S., the west coast was immediately crossed off the list because of the time difference. It would have been too cumbersome to communicate with headquarters (the UK is 8 hours ahead of San Francisco). That meant the east coast was the best option, but established tech centers like Boston and New York City were never a contender because of the price of real estate and talent. Choosing an affordable market like Orlando for its headquarters allowed Duncan to lease office space with room to grow. Epos Now has roughly 3,000 square feet of space it plans to fill as the company continues to establish itself in the U.S. Having that extra space is a luxury few companies can afford in expensive markets.

“A lot of it comes down to cost. At the end of the day we are an organically-funded company. We’ve managed to grow more than 150 percent each of the last six years, and it’s because we controlled costs to ensure we are profitable,” Duncan says. “We only need to be able to sell online. Why would we base ourselves in a city where it’s three times more expensive as Orlando, but still sell the product at the same price across all states? All that does is wipe out profitability.”

Duncan does point out that software companies who have a demand for enterprise-level sales reps or next-level engineers might be better suited to find that talent in more tech-focused markets. But for Epos, the cost savings of Orlando won the day. According to the CNN Money cost of living calculator, housing alone costs about 260% more in San Francisco, 120% more in Boston, and 411% more in New York City compared to Orlando. And that’s just housing – transportation, utilities, health care, and food expenses are all higher in those traditional high-tech markets. Duncan also admits the year-round good weather in Orlando was helpful when convincing some members of the UK team to transition to the states too.