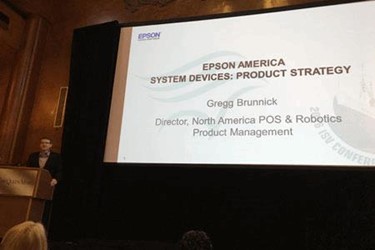 I have to admit that after attending Epson’s inaugural ISV conference in San Diego last year, I was skeptical the company was going to be able to meet its projected deadlines — especially launching an ISV partner portal by the end of 2015 with 10 hand-selected ISVs. Sure enough, however, their OmniLink Merchant Services (OMS) announcement at the National Retail Federation (NRF) convention in mid-January removed much of that skepticism. OMS is a suite of cloud-based software solutions for the retail and hospitality markets. Powered by hand-selected Epson ISV partners, OMS provides hospitality and retail VARs with a global network of cloud and mobile based tools, best practices, business data, and expertise.

Epson predicts its mobile printer market share will double over the next year. The key, says Brunnick, is the company’s strategy to continue evolving its core POS products (e.g. Epson Mobilink, M-Series, and mPOS-friendly printers) while enabling tablet POS integration, mobile printing, and expanded connectivity options. Epson is also expanding into new workflows, such as KDS (kitchen display system). The OmniLink L90plus-i LFC (linear-free compatible) printer, for example, is designed to be tablet/smartphone friendly, enabling online ordering, supporting custom label applications, and it can be used as a KDS add-on. The intelligent printer enables direct-connect KDS, and with the addition of an Epson KDS expansion module, can support multi-station KDS environments with up to nine displays. 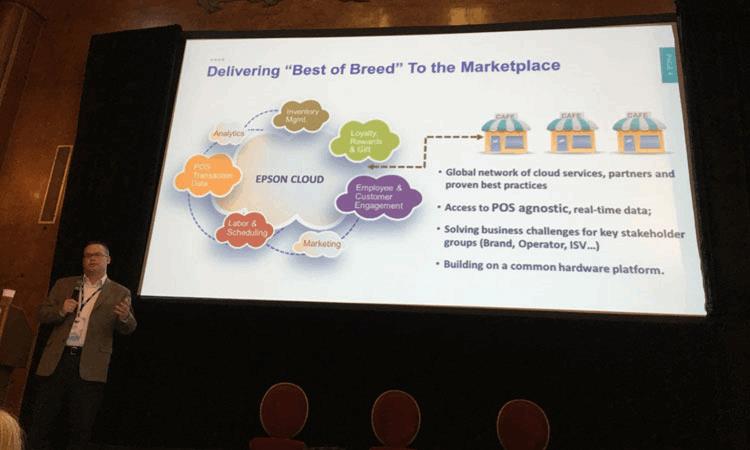 Joel Doherty, Epson’s global strategy and development business systems manager, helped spearhead Epson’s foray into the cloud in 2013 with the launch of the Epson OmniLink smart solutions family. At this year’s ISV conference, Doherty challenged ISVs to think differently about Epson POS printers. “These devices are the new data gateways — and sometimes paper comes out of them,” he quipped. He also talked about challenges retailers face accessing data from so many disparate technologies and devices. Epson is helping its ISV and VAR partners solve this challenge by developing a Universal Parser and Epson WebAPI (application program interface), which will allow Epson’s products and cloud services to speak the same language and make it easier to deliver best of breed services, he says. Epson currently has 30 partners certified on its cloud, offering a range of solutions, such as a:

During the event I had a chance to talk with several ISVs, including Jim Ngo, president of Cirra Systems. Headquartered in Park City, UT, Cirra Systems has developed the cloud-based Tavlo Restaurant Management System to improve restaurant efficiency, reduce errors, and drive revenue through online sales and marketing. Within the past year, the ISV won a kiosk project with the University of Utah. “We partnered with the university’s food and beverage provider to improve the food ordering process,” says Ngo. “We set up the cafeterias with Epson OmniLink TM-T88V-DT intelligent printers and TM-U220 receipt printers in the kitchen, and Epson TM-m30 receipt printers stationed at each of the cafeteria’s self-serve kiosks. The OmniLink TM-T88V-DT acts as the device hub, and with its embedded PC it drives kiosk applications to communicate directly with the Epson receipt printers. OmniLink’s ePOS Print and Server Direct Print technology enables communication between the receipt printers and mobile devices anywhere in the facility.”

As soon as a student places an order, the information is sent to the Epson Cloud and delivered to the OmniLink printer located precisely where the order is fulfilled. “Even though this same capability could be achieved without the cloud, this setup puts us just one small step away from enabling students to place food orders on their smartphones,” says Ngo.

Another benefit of providing a cloud-enabled POS system is seen with menu changes, says Ngo. “If the cafeteria wants to add a new menu item, or if they run out of a particular item, we can remotely update the menu in the Epson Cloud and the change is reflected almost immediately on their kiosks,” he says. “That’s a huge value to the client and a big differentiator for our company.”