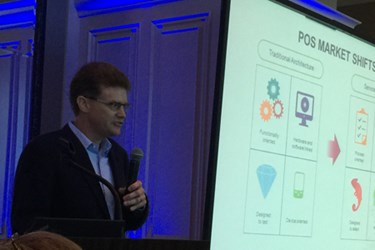 As we move into the next wave of computing — the Internet of Things (IoT) — IT hardware manufacturers are looking for new ways to add intelligence (i.e., enterprise asset intelligence) to their products. Electronics manufacturing giant Epson has been making big strides in this space, beginning in 2012 with the release of Moverio, Android-based smart glasses, and the following year with its OmniLink mobile point of sale (mPOS) system. At the heart of OmniLink is a microcontroller (read: small computer) that enables Epson printers to be connected to the cloud via Bluetooth, Wi-Fi, Ethernet, or USB. Once connected, OmniLink printers can serve as gateways to cloud services, web printing, open platform mobility, peripheral connectivity, and other functions traditionally reserved for PCs.

Despite creating smarter devices, a cloud infrastructure, and a POS terminal and peripheral connectivity programming language (called ePOS), there’s still one thing missing: the killer app. And, that’s why it was necessary to bring together its top ISV partners and hold an Inaugural ISV Partner Conference last week in San Diego at the Manchester Grand Hyatt Hotel.

Gregg Brunnick, director of North America business systems product management and technical services at Epson, wasted no time getting to the crux of the matter:

“There are many different kinds of POS systems in the marketplace, but many of them have an Epson printer as a common denominator,” said Brunnick. “By capturing and cloud-enabling the data stream at the printer, we can bring these customers all sorts of cutting edge solutions while at the same time extending their legacy POS system investments.”

In addition to Epson’s line of OmniLink printers, many of its older printers can be retrofitted with OmniLink controllers to achieve the same effect. “Think of the printer now as a real time gateway,” said Joel Doherty, global strategy and development business systems, Epson, during his deep dive session on Epson’s cloud development strategy.

Doherty also shared that Epson is currently working with Trustwave to ensure its OmniLink printers and data capture strategy remain Payment Card Industry (PCI) compliant. “We recognize that we need to keep the data safe and that’s why we segment cloud data into four buckets: consumer identifiable data [this is where PCI compliance is most important], application outputs, raw transactions, and market data,” said Doherty. 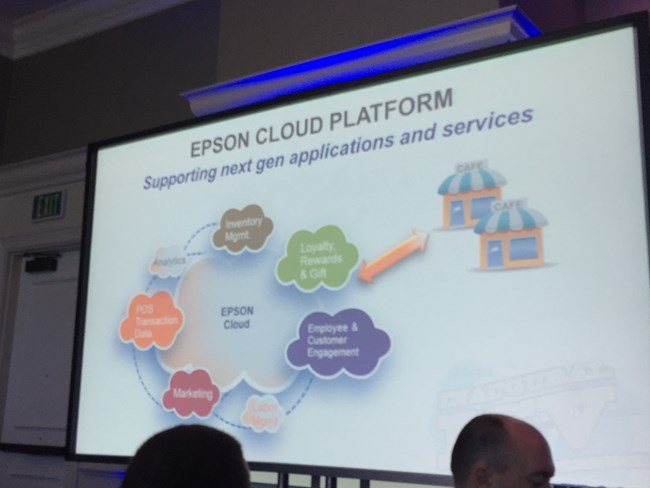 Doherty shared Epson’s business strategy over the next six months, which includes a cloud portal connected to an app store. “We’re currently running pilots with 10 ISV partners, and we’re planning to launch a new website sometime next month that will educate our ISV and VAR partners about our new cloud service offerings,” he said. Epson also is planning to make a big splash at NRF in January with announcements to include POS support partnerships, case study success stories from its pilot tests, a detailed onboarding process for its cloud services, and cloud marketing assets for ISV and VAR partners.

Over the next few months, Epson will also iron out the details of its ISV program, which will pay monthly recurring revenue to ISVs and VARs who sell apps on the Epson Cloud platform. During the ISV Conference, a couple of Epson presenters shared a few numbers, but admitted that Epson’s cloud subscription pricing was still a work in progress.

In interviews with Business Solutions, Ivan Long, VP of operations at Auto-Star and Gregory Naçu, cofounder of Quetzal, both admitted that using Epson’s printers to bypass customers’ POS system wasn’t on their immediate radar. “We own our customers’ POS systems, so it makes more sense for us to develop apps there,” admitted Long. “But, we are excited about ePOS and are finding it to be much simpler to use and more feature reach than the previous peripheral programming language — ESC/P2.”

One ISV who was excited to learn about Epson’s move to the cloud was Jim Ngo, president of Cirra Systems. Ngo made a strategic move to the cloud about 18 months ago, and he’s already seeing positive results. “One example is the University of Utah, where we partnered with their food and beverage provider to improve the food ordering process,” he says. “We set up the university’s cafeterias with self-service kiosks, which are integrated with Epson OmniLink printers and connected to the cloud. As soon as a student places an order, the information is sent to the cloud and delivered to the OmniLink printer located precisely where the order is fulfilled. Even though this same capability could be achieved without the cloud, this setup puts us just one small step away from enabling students to place food orders on their smartphones.”

Another benefit of providing a cloud-enabled POS system is seen with menu changes, says Ngo. “If the cafeteria wants to add a new menu item, or if they run out of a particular item, we can remotely update the menu in the cloud and the change is reflected almost immediately on their kiosks,” he says. “That’s a huge value to the client and a big differentiator for our company.”