Why Your On-Site Employees Can Benefit From A Remote Mentality 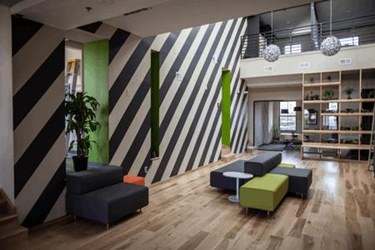 If you think the rise in remote work options is a result of millennials demanding flexibility, Wildbit would beg to differ. The 16-year-old software company builds products designed to make developers more efficient, and notes, “We’ve been doing the ‘remote thing’ since 2000. Half of the team works out of Philadelphia, with the rest spread out around the world. Our culture, communication, and process are specifically tailored around a remote team.”

Wildbit currently has 26 employees, more than half of whom work remote, including in Romania, Canada, Russia, and Serbia. Even the company’s headquarters in Philadelphia is designed to mimic some of the advantages of working from home. In 2014, when the company decided to expand its square footage, it decided on a design to allow each employee to have a private office large enough to collaborate with one other person when needed. To help incorporate remote workers, each breakout room was built with video conferencing capabilities (see co-founder and CTO Chis Nagele’s blog post “Wildbit HQ: Ending The Open Office Epidemic” for more details on Wildbit’s office design).

Software Executive recently interviewed Wildbit co-founder and CEO Natalie Nagele prior to her talk “Keeping the Fun in Your Business Life,” which she will present at the Business Of Software conference in Boston on September 18-20. Nagele shared her insights on the effectiveness of a remote workforce and the in-office mentality that focuses on maximizing efficiency.

Q: What would you say to a fellow executive who is against remote work options?

A: I think remote is more efficient. The company started this way. Chris Nagele started the business in 2000 with a developer from Romania. We’ve been remote much longer than we’ve been not remote. We just celebrated the anniversary of somebody on our team who’s been with the company for six years. She was the first US-based local employee in Philadelphia. We went remote first, and then working locally became the weird transition for us.

Q: Why was Wildbit a trailblazer in the remote workforce concept? Why do you continue to embrace a remote model after more than 16 years?

A: Trailblazer feels like it was intentional. I think the reality is we wanted to find great people anywhere. Chris was really young when we started the business. When I came into the business, I had connections in Russia, and we found incredibly awesome developers for contract work. We didn’t have to hire employees right away, and hiring was scary when you are doing client work.

What we’ve learned from remote work is that it lends itself to a better environment for focus and better-quality work. When we did start building our office, we were pretty adamant on closed offices, tighter offices for everybody, and taking that remote culture and applying it to this physical space as well. We’re making sure conversation is synchronous as much as possible, it’s all published online, and things are shared. You give people the opportunity to respond and respect their own time and manage their own time, instead of being distracted constantly by whoever decides to pop into your office.

Remote always felt right to us. From building a business, we can work from anywhere and the team can work from anywhere, and that’s really empowering and provides a really great atmosphere to work. Now, we love having the physical Philadelphia location – and I joke that, if I had my way, I’d have everybody in Philadelphia. But that’s because I just really like the people I work with, and I’d love to be with them much more often. But we went through a huge culture shock when we had an office for the first time. Some of the developers came over on visas that had been working for Wildbit for a really long time, and working remotely, and they had this huge culture shock when they were not productive in the office in the way that they thought they could be. There are people to talk to, and somebody’s making coffee, and somebody’s walking over to chat with you. All of a sudden when they were here, they were like, “I want to work at home, at night.”

Q: Wildbit is experimenting with a four-day, 32-hour work week. How has your belief in building a company around a remote culture and a closed office set the stage for this?

A: Yes, I think this is the next iteration of something that’s been pretty deep in Wildbit’s DNA for a long time, before we even knew how to put words to it, or knew that we needed to put words to it. One of the things that makes Chris steam is wasted time. He’s always making sure nobody’s sitting on their hands, and everybody’s got something they’re working on. Otherwise, what’s the point?

We have flexible work hours, where we’ve always said, “It’s 3:00 and you’re beat, and you’ve got to get through the day, please don’t sit there and stare at the computer and wait until 5:00. Just go home. That’s not productive. That’s not useful and it doesn’t contribute to anything.”

It’s connecting the dots. It’s us constantly reviewing what that means, this ability to focus, this ability to not waste time, to have a fulfilled professional life. How do we keep pushing boundaries on that a little bit and seeing how far can we take it and how much better can we make it?

For more insights on how to Wildbit works effectively and profitably with so many remote employees, check out these posts on the Wildbit blog: